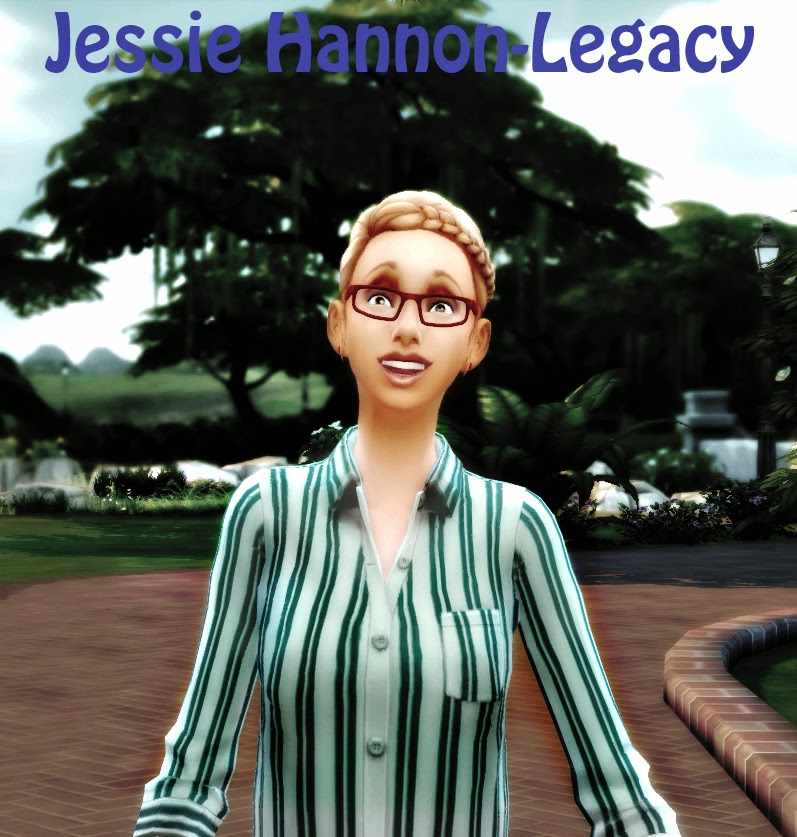 Welcome to my first ever sims 4 legacy. This here is Jessie Hannon. She really is a joy to be around. Jessie, introduce yourself to everyone.
Jessie:Oh, um......hi Now I feel like I need to explain Jessie's lack of enthusiasm. She(Jessie) isn't really interested in doing a legacy. None of her traits(insane,Genius,Quick Learner,and loves the outdoors) have pointed her in that direction,but I(her evil creator) have decided that I'm going to torture this lil darlin by making her A: get married and produce lots of little chin-lacking children or B: burn to a crisp while cooking a cheap ass box of mac n cheese. I'm kinda hoping to see her engulfed in flames.... 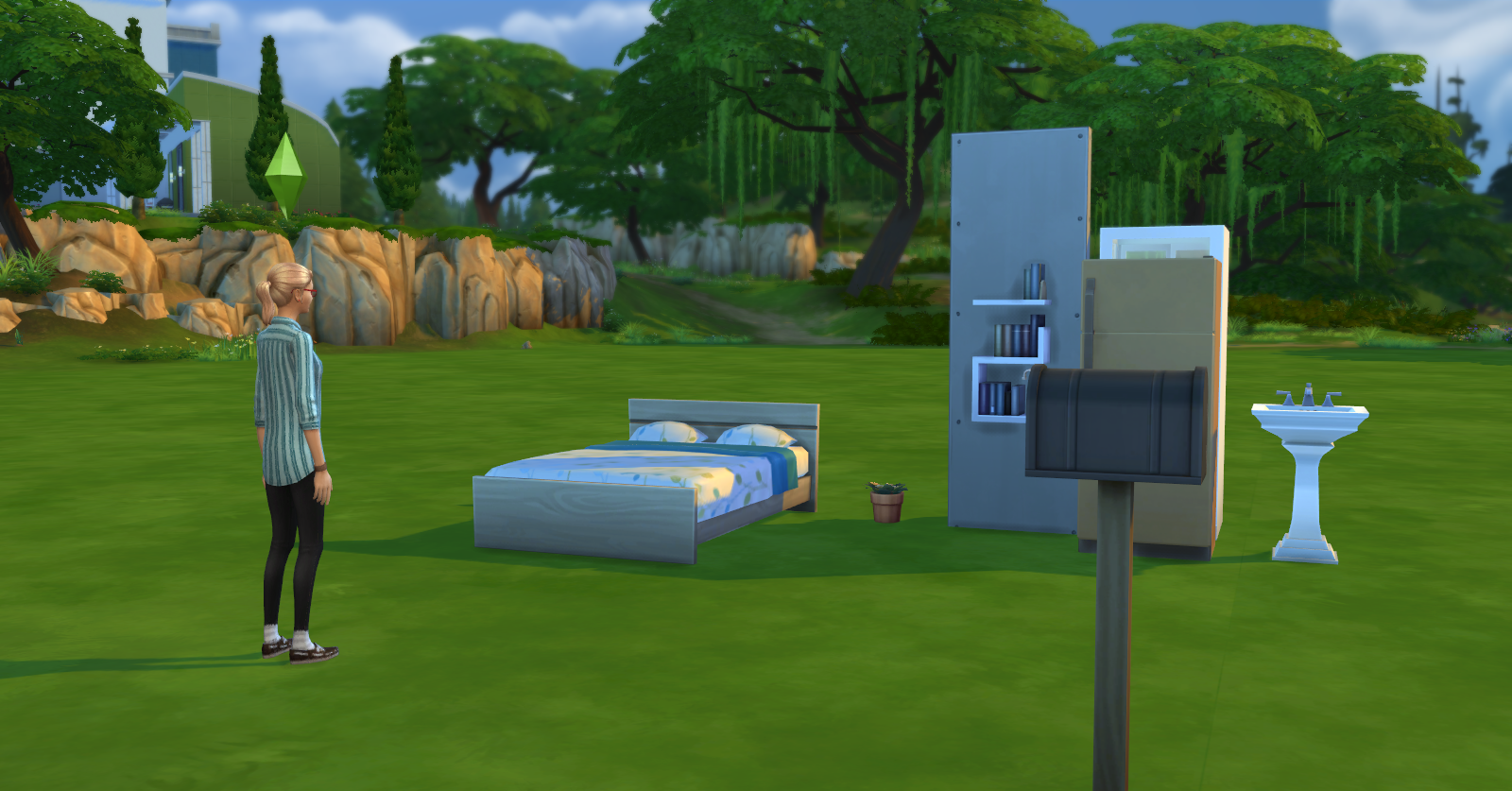 Since this is a legacy Miss Jessie gets to start it off correctly, with basically nothing.
Evil Creator: I at least gave you some books and a plant to stare at, Jessie.

Evil Creator: Well, I really like your chin. Or lack thereof. You should produce some interesting looking offspring. 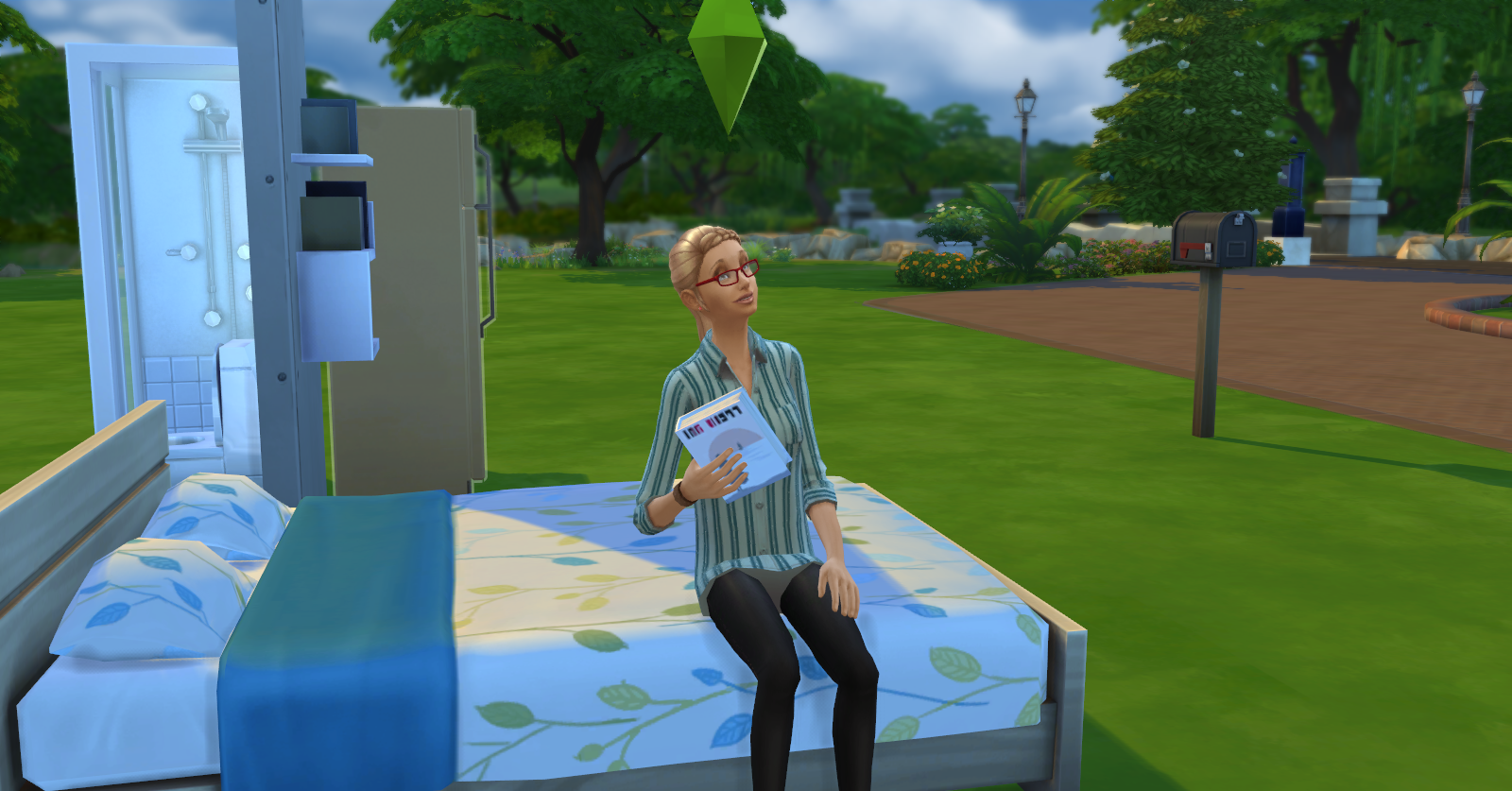 Time to get started! Jessie's first need was to get a job. She joined the Tech Guru career without hesitation.

Jessie:I'm surprised you even let me choose what I wanted to do.
Evil Creator: Keep lipping off like that and I'll change my mind. Are you trying to be difficult? 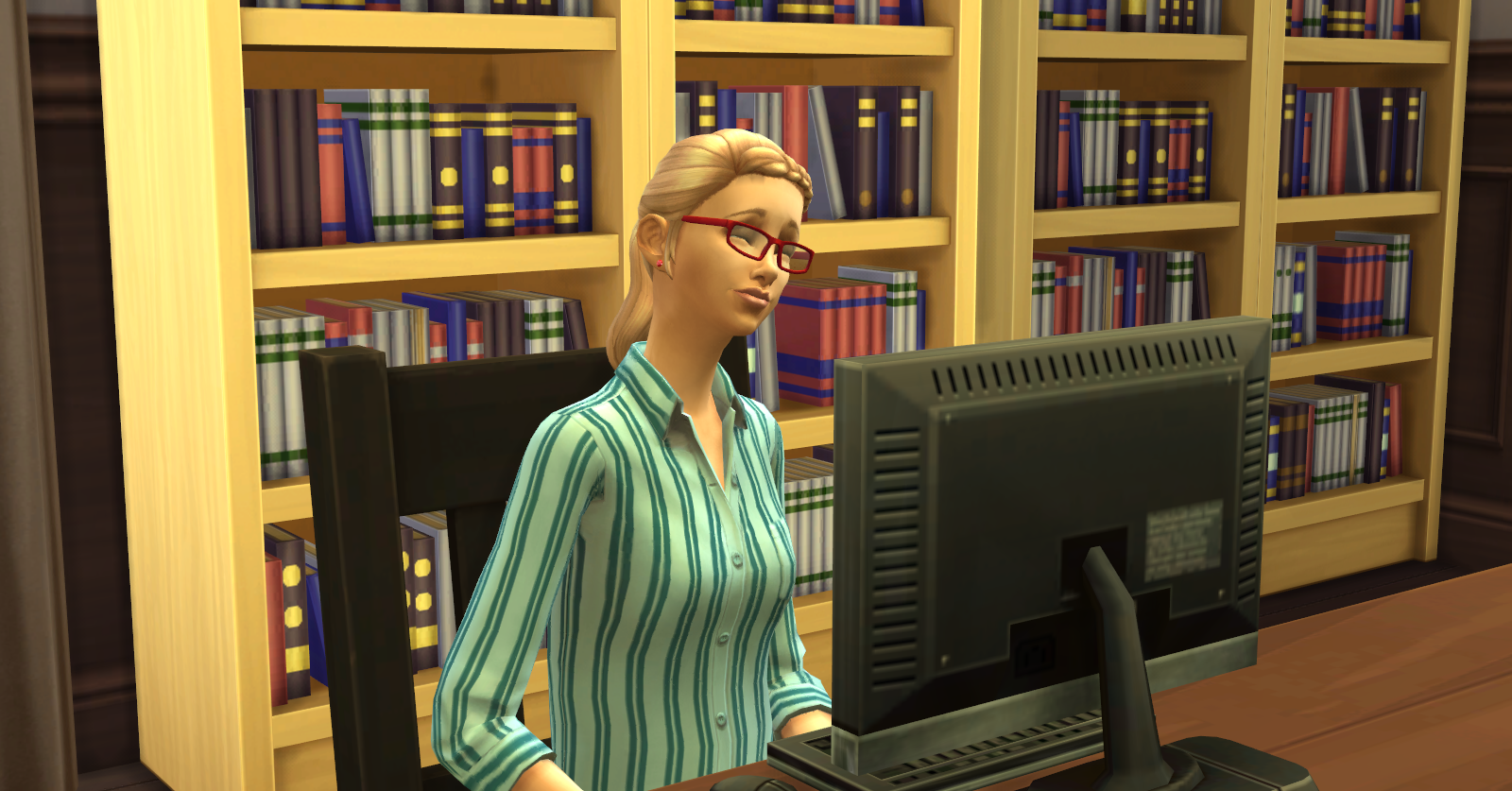 She sure did seem to have a good time working on that raise. I had bigger plans for Miss Jessie though. She needed a man, and was showing no interest in finding one. So while she was playing BlickBlock, I decided to go off on my own and do some man hunting for her. 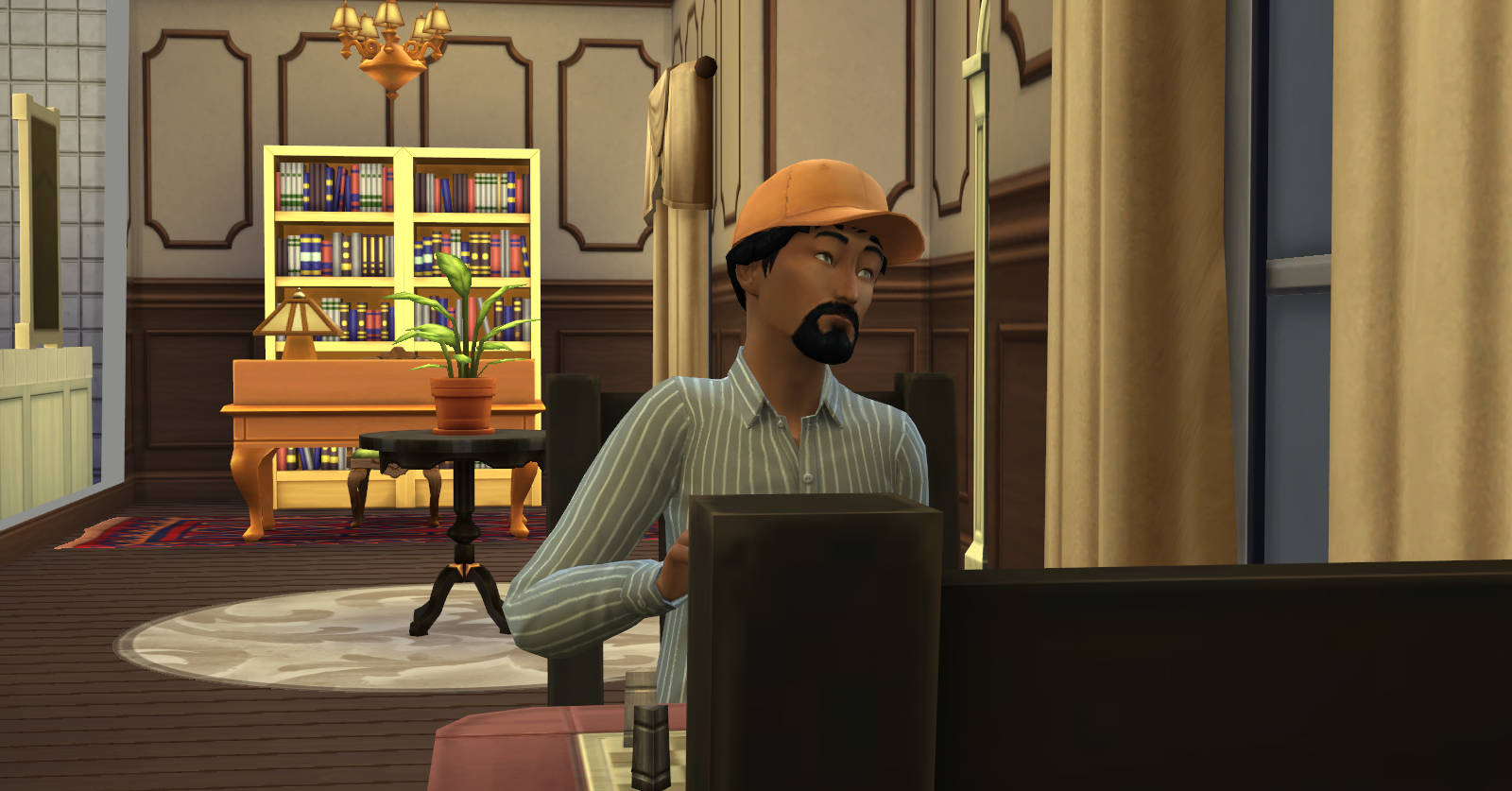 There were absolutely no men around! This is going to be way more difficult than I had imagined. I had searched high and low and then finally low and behold, in the corner playing chess by himself,was this not so hot piece of man meat.
Evil Creator:  Even I'm not that evil. Well, maybe.......nope. Not going there. While I was away hunting, Jessie was actually being social with someone. I'm pretty sure it was all forced on her, but nonetheless, it still counts.
Evil Creator: Jessie, Can you please at least choose friends that don't look like they get paid with dollar bills?
Jessie:That's really rude. She's a nice girl. I think we have a lot in common. 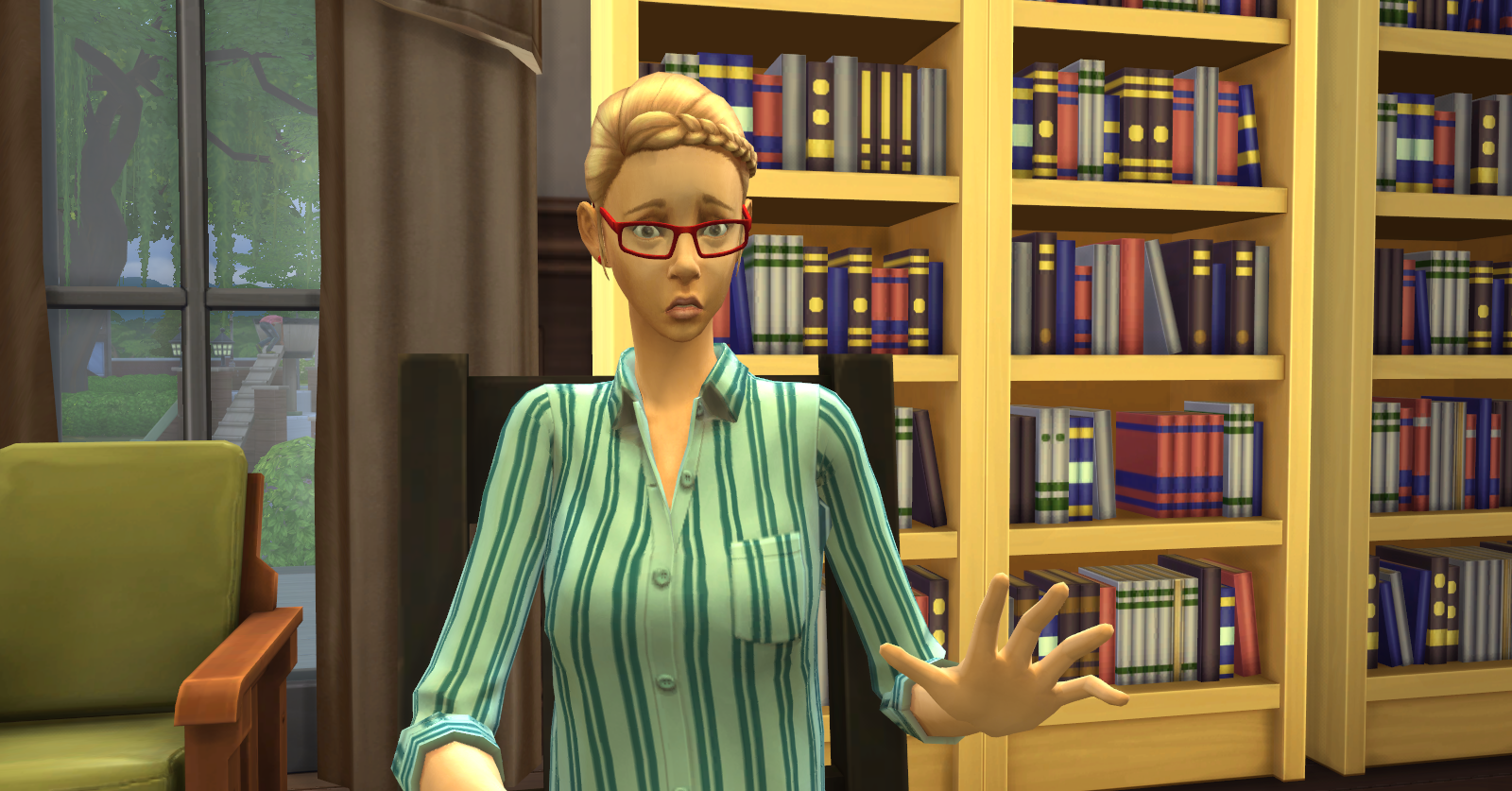 Evil Creator:  Well, then I might as well go ahead and tweak your wardrobe. Remember that saying, you are who you associate with?
Jessie:Gulp.....you wouldn't......
Evil Creator: Oh I would...and will. Have I by chance told you that you have big ears? 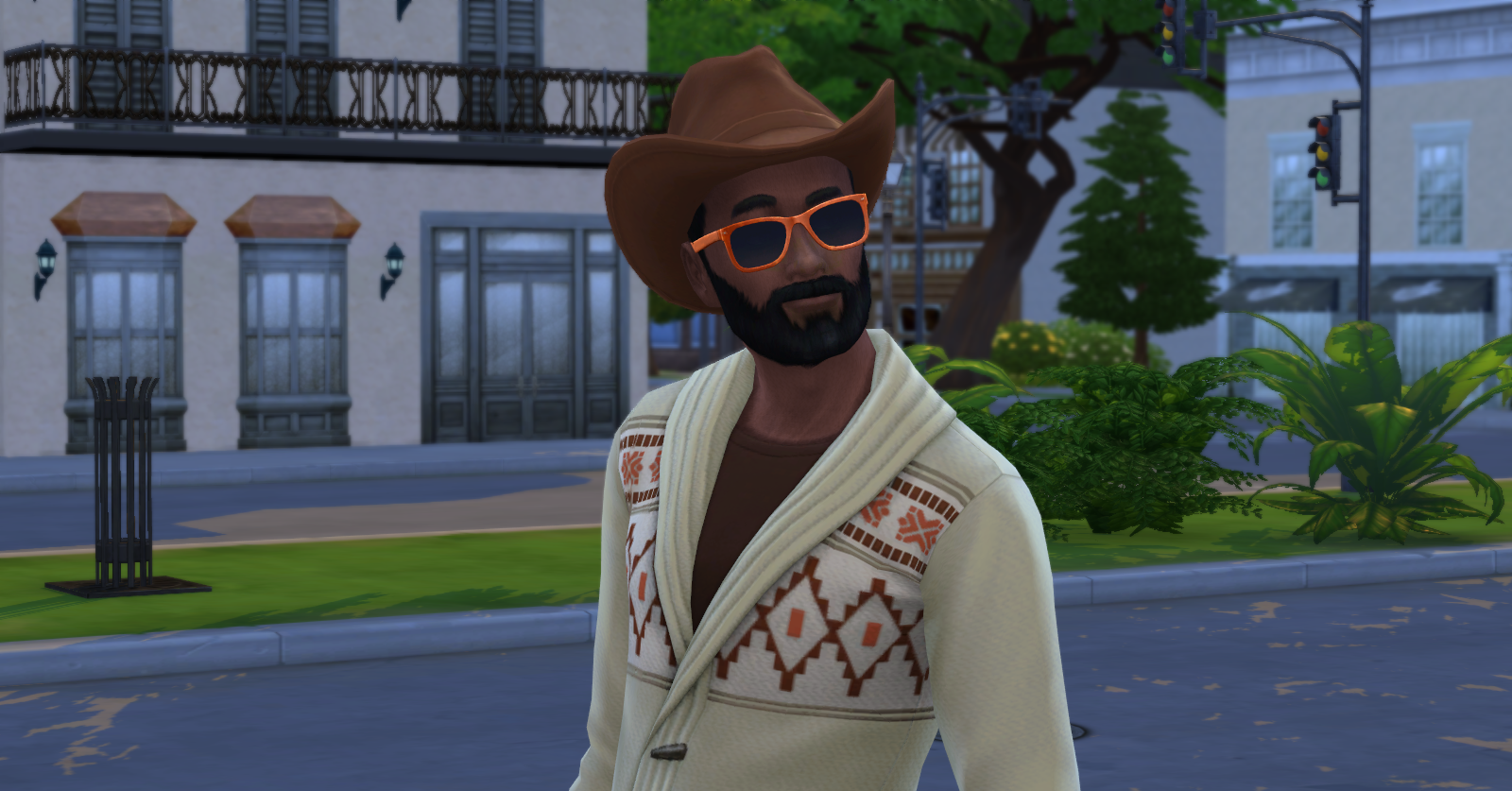 While we were bantering back and forth, a glimmer of orange caught my eye. The perfect specimen I was waiting for. His name, Pablo Storey. with style like I've never seen before. This was the one. Had to be the one. I would make him the one!
Evil Creator: OMG OMG OMG! JESSIE!!!! Get over here and meet this guy!!!!
Jessie:No. I don't dig orange...or cowboys. Sweater wearing cowboys at that and beards are gross.
Evil Creator: Jessie.....don't make me warn you again...... 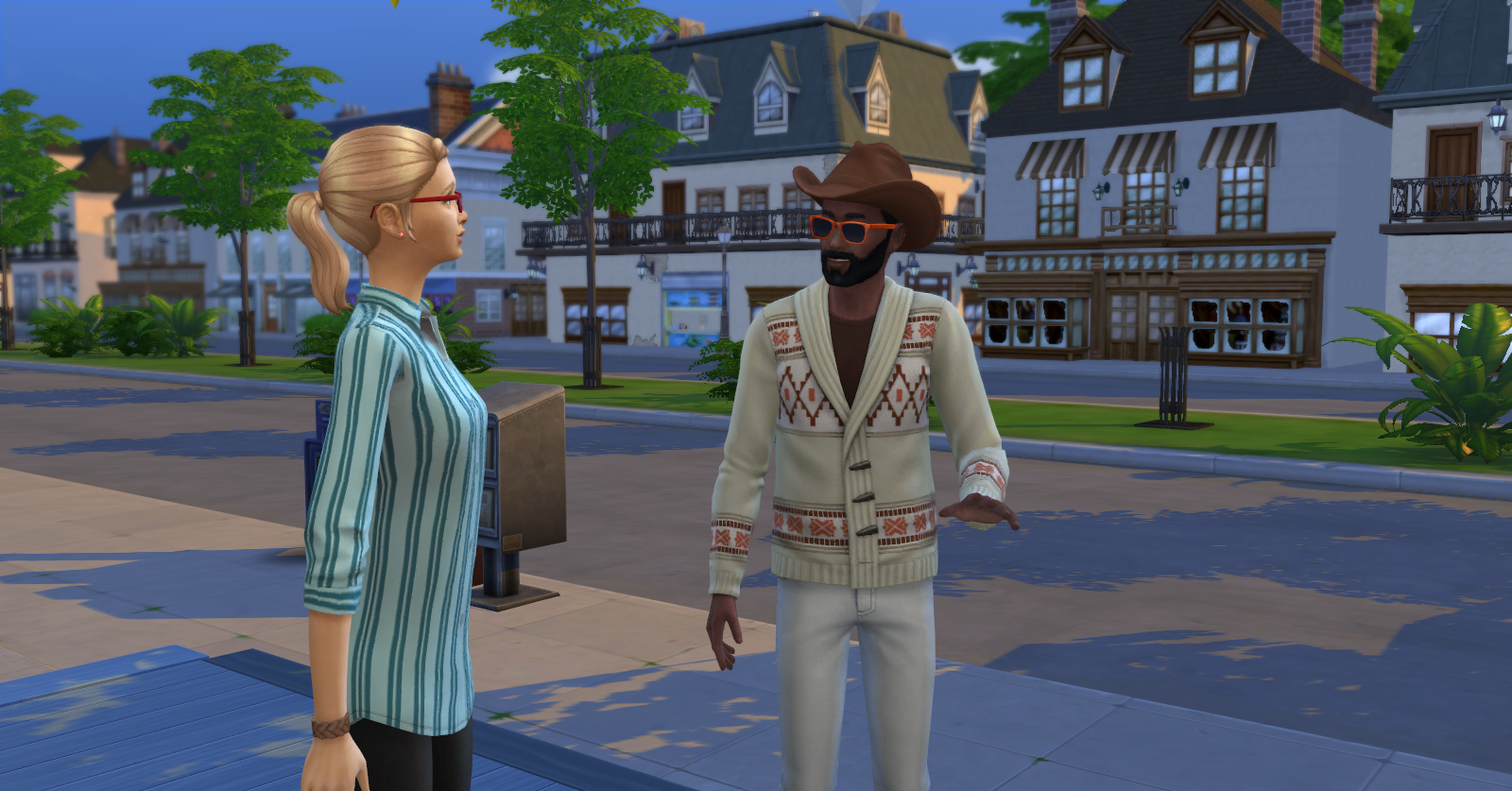 With that final statement, Jessie, went outside to start up a conversation. Now I know I'm getting ahead of myself but, OMG! Those chinless hairy babies are going to be fantastic! I'm already overjoyed.

Jessie:I really hope that I'm infertile. Just to piss you off. 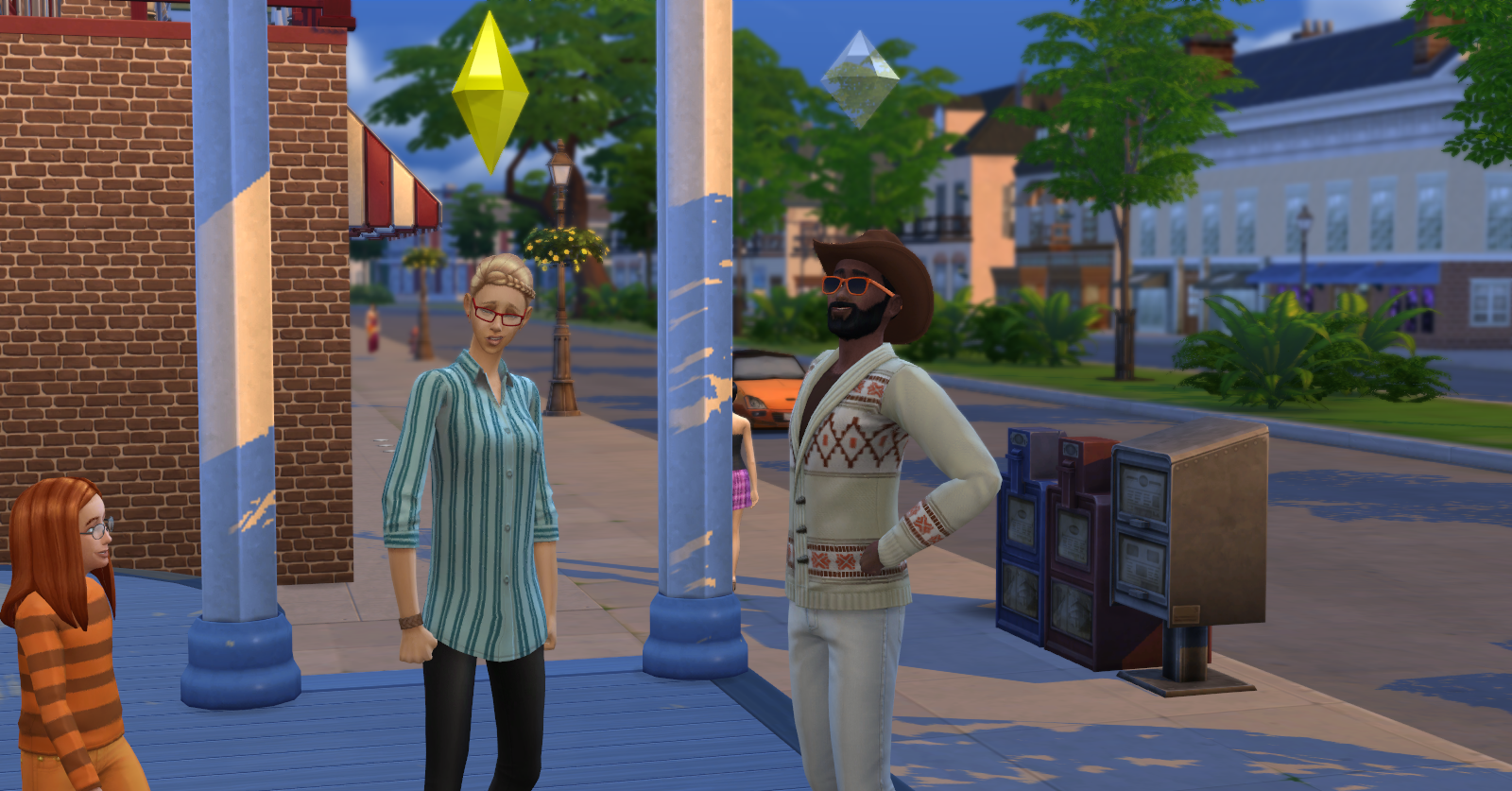 The conversation really didn't start off on a good note. Pablo, as we found out very quickly, is hot headed. All it took was one slight show of insanity and he blew a gasket. 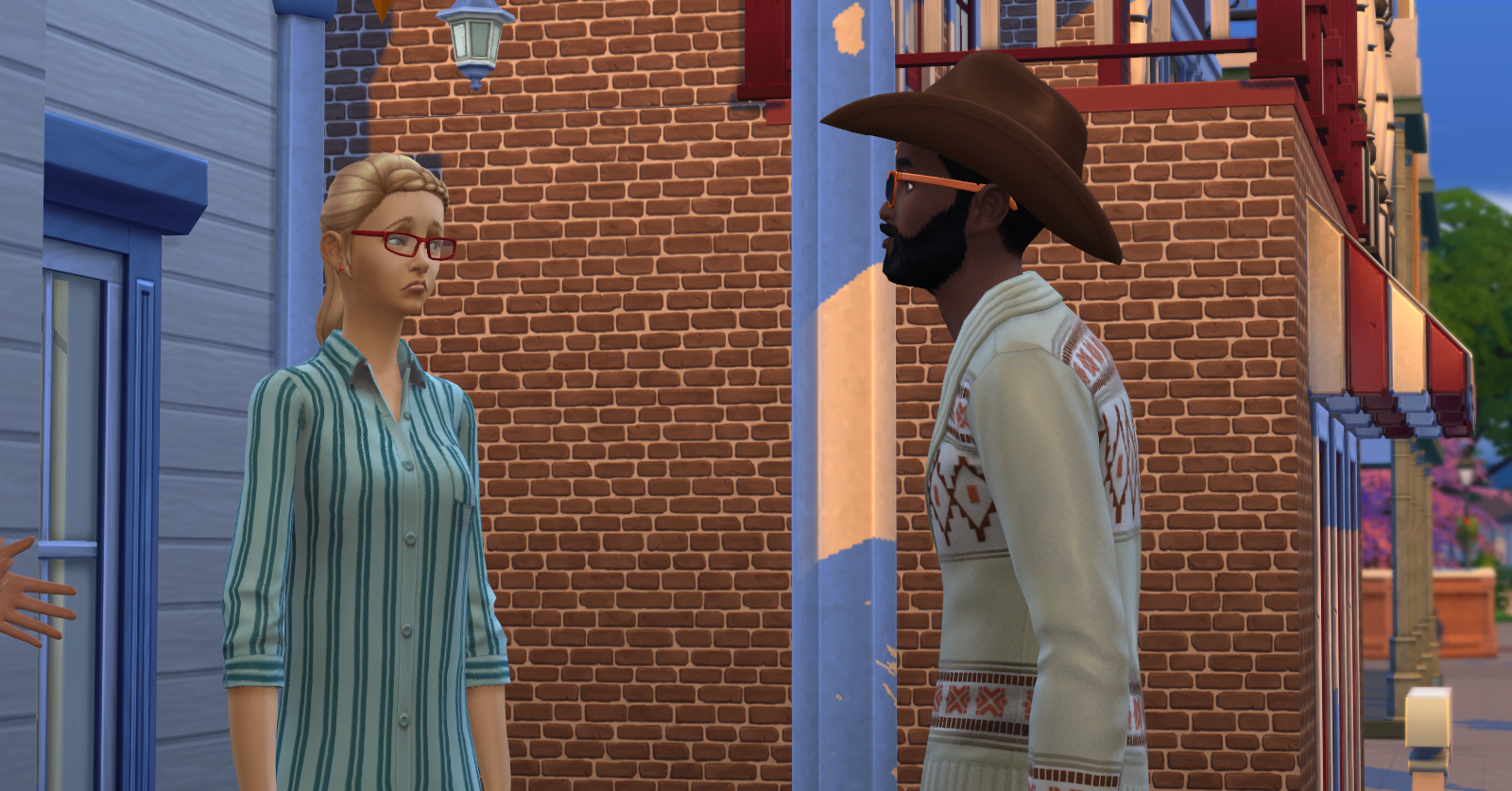 Which in turn hurt lil miss pouty pants' feeling. We are not quitters though, me and Jessie. We will succeed at winning over this hairy cowboy. The lineage of chinless hairy nooboos is at stake here!

Jessie:Can't we look for someone more pleasant to speak to and look at? Haven't you already ruined my life enough?
Evil Creator: I haven't even started yet, dear Jessie..... 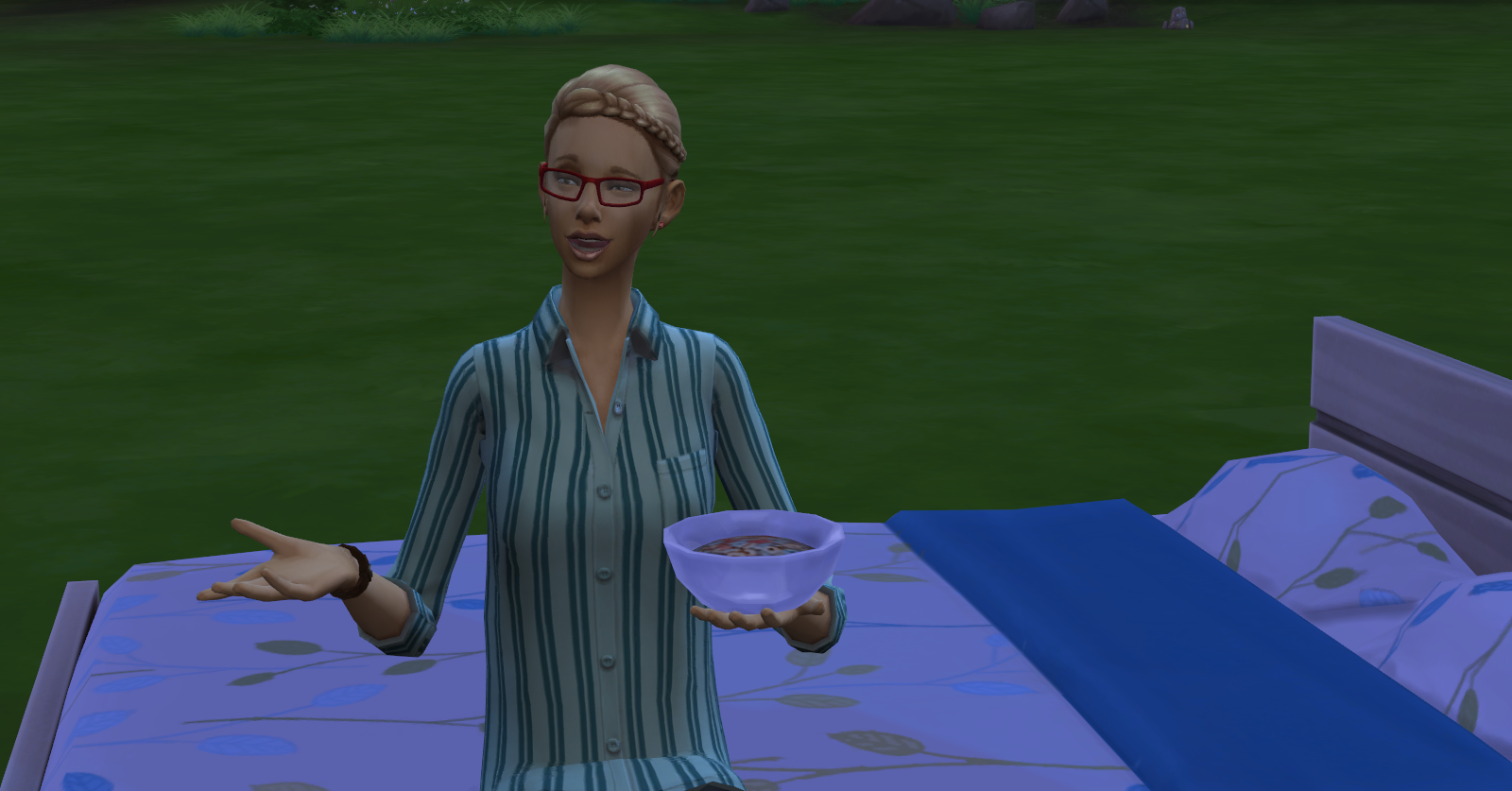 After our failed attempt at becoming friends with Pablo, I sent Jessie home to eat. She really gets rather grumpy when shes hungry. As I sat there watching like Big Brother, I noticed something rather odd. Jessie, was having a conversation with herself......well with someone I couldn't see, at least.

Jessie: I know! He wasn't even able to carry on a conversation about the inner workings of DOS!
Yeah, uh..... no. Well I guess I could give it a shot. Maybe you're right. YES! That is a wonderful idea. Right. Ok, see ya tomorrow, Katie.
Evil Creator: What the fudge?!!! 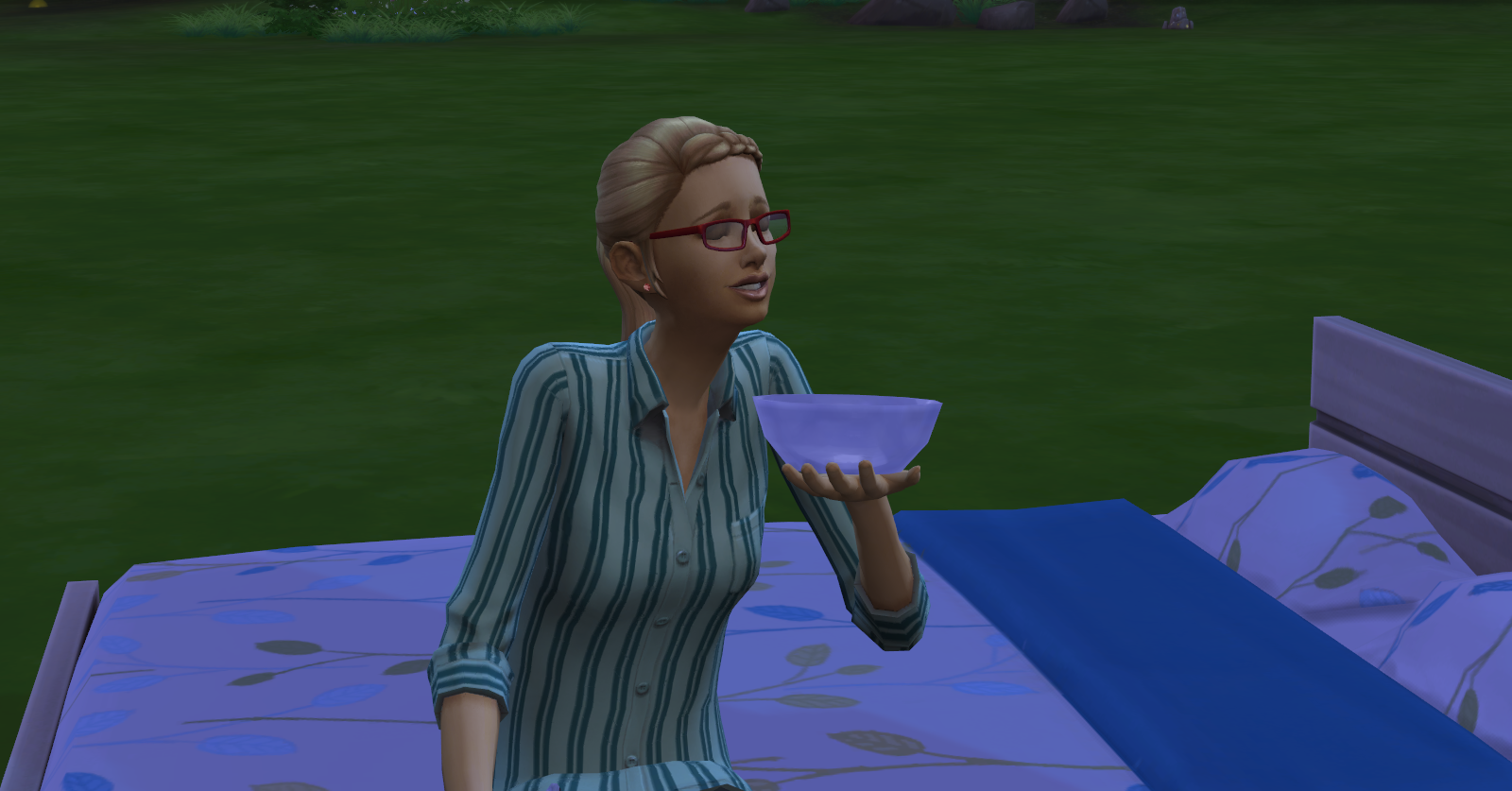 I left her to herself and her bowl of cereal. This girl is a whack! Tomorrow is a new day, though. Hopefully some of the crazy has worn off by then.